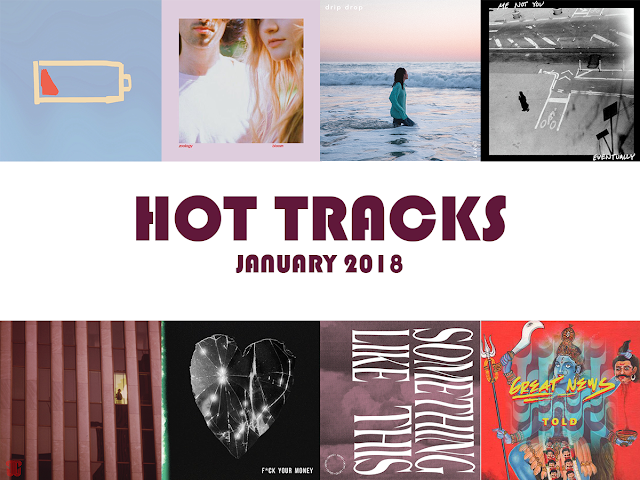 The first month of 2018 has come and gone. Check out these stellar track that started off the New Year right.

G
Canadian-British duo Zoology rolled out their Bloom EP this month. The duos been gaining traction over the last year with their chilled out vibes that combine jazzy guitars and electronics. A highlight off the EP is "Waterfalls" where they have an accompanying video compiled of videos of the duo in Berlin.You can stream Zoology's EP in full here.
LEYET- 'DRIP DROP'
LA-based LeyeT has been a growing force. She returned his month with refreshing pop track "Drip Drop". If it's not her flowing melodies that capture your attention, it'll be her undeniably unique vocals that soar above the rolling tides. Expect more from LeyeT as this is just the beginning.
ELOHIM- 'FUCK YOUR MONEY'
We've been obsessing over Elohim since the day she first started releasing music. This last year she rolled out some of our favorite tracks, and with the new year here, she's not stopping. If it's not the darkened verses on "Fuck Your Money" that have you hooked, Elohim's bouncing chorus will have you blasting this one on repeat. Elohim is set to release her debut album this year along with a slew of festival performances including Coachella, Bonnaroo, Electric Forest and more.
UKIYO- 'SOMETHING LIKE THIS'
Australian producer Ukiyo is a force bubbling underneath the surface. It was just a year ago that he released his single "Calling" that had heads turning. Now he's back with his latest "Something Like This" featuring vocals from FEELDS. The track is packed with surging synths in the verses and an undeniably catchy chorus that's dark and brooding. Keep your eyes on Ukiyo as 2018 is the year he emerges completely from the waters.
STEVIE WOLF- 'LOW'
We've been keeping our eyes on rising alt-pop artist Stevie Wolf. After breaking through on his single "Who" back at the end of 2017, he's continuing to roll with the tide on his latest "Low". Stevie's vocals will have you melting with their energized softness in the verses. The simplistic guitars support his vocals all the way until the bass kicks in on the powering chorus . One listen and Stevie Wolf will be your new favorite artist.
ME NOT YOU- 'EVENTUALLY'
Me Not You emerged early back in 2017 with their alt-rock sound that caught the attention of the blog sphere rather quickly. After rolling out their debut EP, this duo is back with their latest "Eventually". The track is backed by a humming synth line that lifts the melodies to new heights. The lyrics dive into the idea of ending a feud with someone and letting that baggage go. It's a chilled out track that keeps things going for this BK duo.
PALACE WINTER- 'TAKE SHELTER'
Denmark's Palace Winter are back with their first single 'Take Shelter" off of their upcoming album. Powered by energized piano chords, this track soars into the night sky with its glowing melodies and endearing energy. Take flight with this one below.
GREAT NEWS- 'TOLD'
Norwegian's daze pop outfit Great News started off the new year with a cruising single "Told". Diving into a 80s rock vibe, they combine the best parts of garage rock while keeping subtle underlying hints of the current alternative scene in their pocket. Hit play below and cruise your way into the rest of the year with this one.