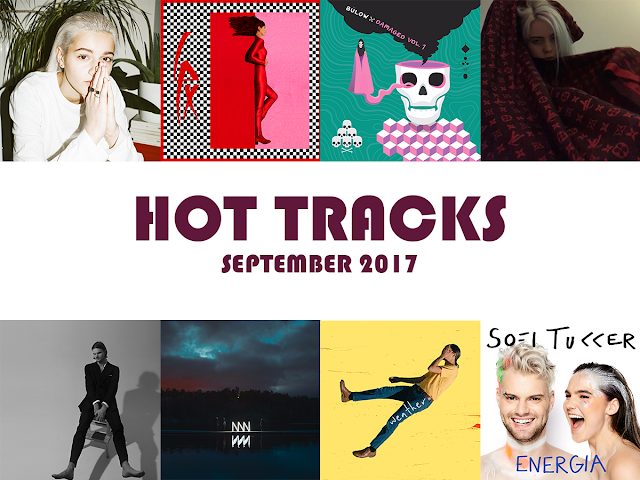 LPX - 'SLIDE'
Lizzy Plapinger broke out this year with her new solo project LPX. Instantly winning us over with her new sound, she's manage to really showcase her talents with every new track. "Slide" is just another step forward for Lizzy as she finds the perfect combination between the angsty rock guitars and her perfected pop lyricism. We can't wait for her official debut EP to drop this January. For now, feel the rage on "Slide" below.


SOFI TUKKER - 'ENERGIA'
This year has been massive for Sofi Tukker. Massive might be understatement when you have a song placed in the iPhone X commercial. Regardless, Sofi Tukker continues their reign in the electronic/dance realm with "Energia". Sticking with there signature Portuguese lyrics, this track is a burner as it just picks up more and more steam as it goes. Get energized with this one below.


ADRIAN UNDERHILL - 'WEATHER'
Adrian Underhill is currently rolling out his debut album that's due out in February. This last week he release his latest single "Weather", which is a chill electro-pop tack that'll have you feeling all sorts of things. The lyrics are gloriously sentimental, while the production from Kindness is simplistic yet energizing. Check this one below.


FRED NICOLAS - 'HELP'
Swedish songwriter, producer, and multi-instrumentalist Fed Nicolas emerged this month with his debut single "Help". Vocally Fred Nicolas is stunning as he flips between a glorious falsetto and powering vocals. The production is Swedish pop at its finest with its shining synths in the chorus and echoing beats in the verses. Fred will release his debut EP this coming spring. For now, get familiar below.


BÜLOW - 'THIS IS NOT A LOVE SONG'
Young rising star Bülow is definitely a name you're going to want know. Her single "This Is Not A Love Song" is effortless with its catchy hooks locked in it's danceable production. It's an instant hit that falls among the likes of Sigrid. Bülow is destine for greatness, and we can't wait to hear what up her sleeve next.


NONONO - 'LOST SONG'
NONONO has been away for quite some time, but 2017 is the year the changed that. Their latest single "Lost Song" is packed with a glooming darkness that wraps itself around the powering production that NONONO is known so well for. The melodies are catchy, especially that irremissibly haunting humming that you won't be able to get out of your head. It's a perfect soundtrack for those gloomy winter days ahead.


BILLIE EILISH - 'BITCH BROKEN HEARTS'
If you don't know the name Billie Eilish yet, you've clearly have been stuck under a rock for the last year. This teenage pop star has made quite the name for herself with her moody pop tracks. All of this landed her on BBC Sound of 2018 long list. On her latest surprise track she released, she teams up with another favorite of our's Emmit Fenn for production. It's moody and dark and everything we've grown to love about Billie Eilish.


MAVI PHOENIX - 'JANET JACKSON'
Rising Austrian hip-hop artist Mavi Phoenix has been a force to reckoned with. She's killed it this year with her debut EP. Last week, she release a deluxe version featuring her latest single "Janet Jackson". The accompany video perfectly embraces the retro aesthetic present in her sound. Mavi is cool and refreshing, which is hard to come across in a saturated indie market. One listen and you wont be able to get enough.