[PREMIERE] Tear In My Heart

NYC's Julius has been cruising along this year with some major originals and re-compositions that all properly showcase the true talent behind the music. Already giving us a taste with his re-composition of Omarion's "Post To Be", Julius returns today to premiere his re-composition of Twenty One Pilots' "Tear In My Heart". Bringing a totally new spin to this already massive track, Julius brings things to a darker feel with surging synths that bring the fuel to a song that is already fire. When you get to the chorus things just explode with the pounding drums. Julius's vocals are delivered effortlessly as they transition in power from the chorus to the softness laced within the verses. This is only the beginning for Julius as he has his debut EP Re-compositions is coming soon. Keep and eye out for more from him, but for now, let your heart bleed out to this one below.

Email ThisBlogThis!Share to TwitterShare to FacebookShare to Pinterest
Labels: Julius, Twenty One Pilots

LA-based producer duo Lost Kings have been rising to the top of the game with their incredible remix game over the last year. Already pulling a massive following, the guys are taking things a whole new level with the release of their original music. Already riding on the buzz of the first taste of their upcoming EP, we are premiering their follow-up,"You" featuring Katelyn Tarver, below. On this one the guys catch your attention with the sparkling synths in the production that light up the night with all that magic. When Katelyn's vocals come in on the verse things cruise smoother and faster to new heights, ready to have your blood rushing. As the verse climbs higher and higher your thrown into a chorus with the perfect hook that'll have you on one massive high. The track keeps rolling onward as the guys pulling on their EDM perfection that they always deliver while bringing a dose of a pop-ready hit that' be sure to soundtrack your days on end.

"We had an amazing time making "You" with Katelyn. We had a blast in the studio and it really translated to the overall feel of the song, which is all about feeling good - nothing else" - Lost Kings
"You" really captures this overall feeling of having a good time, and takes you to a new high with every listen. It's a rue testament showing how far Lost Kings have come, and how much more they will bring to the table. Lost Kings' debut EP drops this Friday, October 23rd on Spinnin Records. Until then, dance to all the good times on this one below!
Posted by Unknown at 11:04 AM 18 comments:

Golden Coast has been our dose of Cali-sunlight for quite some time now, and we just seem to never be able to get enough. The guys are ready to take us away to their tropical paradise once again with their latest release "High Noon Getaway". It's that cruising beat that has us driving into the sunset as the blazing synths shimmer on the waves crashing on the sandy shores. Get ready to ride shotgun as Golden Coast takes you to that secret place below!

As things start to cool down with the changing of the seasons, POWERS continues to bring the heat with their video for "Hot" this week. Delivering us those steaming synths that explode with a disco groove ready to light up your night, POWERS puts on one hell of a show with their slow-mo dance party that packs itself with so much intensity. You'll be lighting up the night with this one as POWERS works your body down to the beat. This duo is hitting up CMJ this week, and is a must-see act. You can catch them tonight at Good Room, Thursday at Webster Hall, Friday at The Knitting Factory, and Saturday at Brooklyn Bowl. Don't miss out or you'll get burned!

Email ThisBlogThis!Share to TwitterShare to FacebookShare to Pinterest
Labels: Powers

Lucy Mason first graced our pages with her star-powered debut well over a year ago. This week, she returns with the spotlight shinning down on her with her latest offering "Lightning Strikes". From the get-go Lucy's vocals dance upon the darkened clouds like lightning brightening the darkest skies above. The track just continues to build upon itself with the soaring guitars and the up-lifting chorus ready to have you floating above the clouds looking down at the mayhem below. Lucy truly has the star power, and this new one is the shinning moment on what is her best work yet. Light up your nights with this one below.

Running With The Wolves

CMJ is this week, and with all things CMJ it's all about catching the hottest band around from all over the world. Of these bands is new risers Secret Weapons, who dropped their debut track "Something New" a few weeks ago. This Brooklyn-based duo glides in on those glistening synths with a verse ready to catch your ear. As you find yourself humming along the chorus kicks in, ready to knock you off your feet with the powering, athematic force behind it all chasing the night. Secret Weapons play tonight at The Knitting Factory and tomorrow (October 14th) at Webster Hall. Press play below, and prepare to be sprinting forward in the wolf pack.

[PREMIERE] Lipstick On My Bed Sheets

Continuing to work his way int our hearts is London's Lex Low, who has been winning us over with tastes of his forthcoming EP. Today, he gives us another dose with the title-track "Mystery", which is one that'll send your heart cruising down a darkened highway ready to set your heartbeat to an ominous tone. Lex Low brings things in subtly with his R&B melodies that ornament themselves with those classic pop hooks building upon one another to create the perfect jam for those late night drives. The track pulls in the chorus with hints of 70s disco fusing with large amounts of soul,  pop-laced electronics, and those silky smooth vocals sliding through the night .

"When I was writing this EP, about 3/4 months ago, I'd been listening to a lot of Jack Garratt, Lapsley, and Mirrorwriting-era Jamie Woon . I wanted to get a bit deeper into the complexities of a relationship like those guys, amongst others, manage to do so well. 'Mystery' is about being perpetually surprised by your lover as you get to know more about them; how you never know what's round the corner. The production picks up on some of those themes - sparse in the first verse, then those big reverby toms come in and it drops into a strange alt R&B funk chorus. My girlfriend actually said it sounds like two different songs stuck together - she didn't like it that much. But I kind of like that, you don't expect the chorus or the strings in the bridge. You want a big bassy synth but it never turns up. It draws on that unexpectedness you experience in a relationship." - Lex Low

"Mystery" is a track that's going to find it's neon colors intertwined inside your mind. Just one listen and you'll be hooked on this one as it pulls you deeper into the depths of your brain. Take a listen to the premiere below, and prepare to be lost in this new love affair.
Posted by Unknown at 10:01 AM 22 comments: 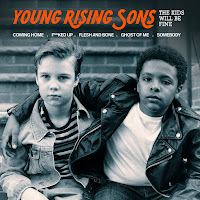 We've been hooked on Young Rising Sons ever since they dropped their roaring debut single "High" over a year ago, released a debut EP that rocked our worlds, and even toured with some of our other favorites that include Halsey, Little Daylight, The Griswolds, and many more. Just in time for the latter part of this year, Young Rising Sons are back at it with new one "Flesh And Bone" that's ready to rock your world, and we've got the exclusive premiere below. Starting off soft and smooth, Young Rising Sons ride on in on a breeze of a verse laced with an echoing guitar and lyrics ready to sooth your soul. When the chorus kicks in your caught on a ride as the guitars start roaring, and Young Rising Sons pick things up to cruise right to your heart. The track keeps surging forward where it finally kicks itself into high gear after the second chorus when the synths push their way in and things start to soar to the sky. "Flesh And Bone" comes off of Young Rising Sons second EP The Kids Will Be Fine out October 16th on Interscope Records. Also, the guys will be hitting the road this fall for a headlining tour with support from Night Riots and The Mosers with tickets on sale now. Get involved on this one below because Young Rising Sons are destine to rise to the top! 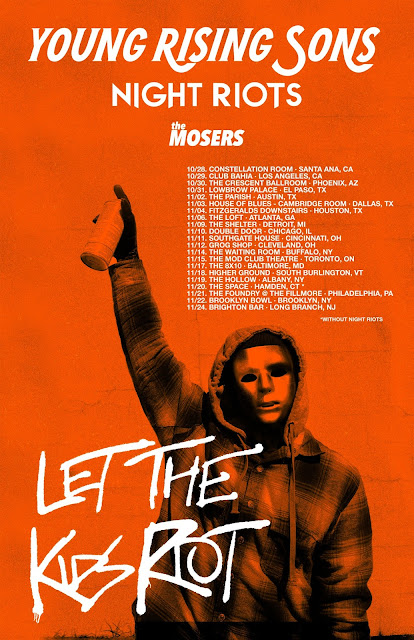 Fresh off the release of their debut EP at the end of this summer, IYES are keeping things rolling as they continue towards their second EP with new burner "Gone". This one keep building upon IYES's signature electronic-pop sound that dubs itself upon the highest rankings of darkness. We get doses of both Melis and Josh's vocals on this track, both delivering the rawness of their lyrics in such a perfected fashion you'll be drench in emotion as your body continues to dance to the beat. This one brings a sense of security as it soundtracks those late nights when you're alone in your room with the night ready to capture your mind. Press play below and let the night take over.

Email ThisBlogThis!Share to TwitterShare to FacebookShare to Pinterest
Labels: IYES

LA's is the land of sunshine and days at the beach, but Oyster Kids are debuting this week with "Creepy", a track glimmering at the surface with a burning dark side below the surface. It's borderline Foster The People's joyous indie rock sound with Sir Sly's haunting tones boiling deeper below the surface with that final lacing of Glass Animals to possess your soul. It's the song that's going to soundtrack a day at the beach while a storm is rolling in, ready to ravage your soul. Press play below and let the haunting begin.

Anna of the North came roaring onto the scene last year with her unstoppable debut "Sway". Things then settled a bit, and we've been waiting patiently to hear more from her ever since. This week, she returns with "The Dreamer", her best work yet! Riding on the icy tides of Norway, Anna finds herself surging towards a radio ready single filled with a burning chorus melting into a frozen production bursting through the tundra. It's this track that's going to crown Anna as the pop-princess of Norway in due time. For now, feel that icy burn from this stellar return from this rising star of Norway!

Email ThisBlogThis!Share to TwitterShare to FacebookShare to Pinterest
Labels: Anna of the North

Lex Low has been giving us some solid grooves for quite some time, and he's back with yet another one that's going to find it's way pulsing into your blood stream. "Addicted Lover" comes smooth as black coffee touching your lips and giving you that caffeine high you're body desires. It's that excellent R&B vibes mixing with that 80s pop synths that'll have you grooving and wide awake all night long. Find that high you'll never get rid of with this one below!