Last night things got crazy at Le Poisson Rouge for the Tesla Boy and Goldroom show. Bringing us their electronic greatness, they made for the perfect night. There was a lot of dancing and drinking and everyone having a good time.
First, I would just like to say how great of a venue Le Poisson Rouge is for a show like this because unlike Terminal 5 or the Bower, the stage is low enough where you feel 10x closer to the artist playing. Yes it's probably only 2 feet lower than other venues, but those feet matter when you're in the front row singing your heart out.
We would also like to throw out how amazed we were by Tesla Boy. We had never heard of them before until this show was announced by Neon Gold and Pop Gun. We sat down and listened to their music and we liked it a lot. When we actually saw them live, well, we were amazed. Tesla Boy, coming to us from Moscow, did what any Russian would do when entering: They played a Russian sounding orchestra piece, which immediately went into their electronic music once it was done. Tesla Boy reminded us so much of the 70s and 80s in the best way possible. Giving us that synthy goodness and the emotion in their music we felt like were in NYC in the 80s exploring the underground music scene. Tesla Boy put on a phenomenal performance. We would highly recommend seeing them again. 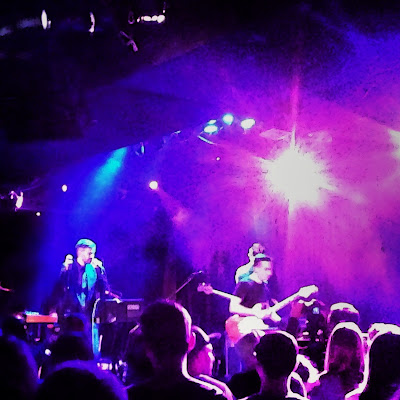 After Tesla Boy, Goldroom graced us with their presence. Dropping their latest EP Embrace over a week ago, they have been touring the US for about a week. Giving us all the music we love off of the EP, they of course played Embrace which was executed with perfection. One of the highlights to us of their performance was a crazy cover of Charlie XCX's "You (Ha Ha Ha). Goldroom's live vocalist gave this song so much perfection! Congrats guys on an amazing show! Be sure to check out Goldroom and Tesla Boy to see where they will be playing near you.